Stem Injection Systems (Europe) Limited was incorporated in 2007 by founders David Layland and Richard Podmore. We constantly seek innovative products to help in the management of unwanted plants including invasive plant species whilst protecting the environment and human health.

We helped pioneer the management of plants by stem injection and introduced injection products to the UK in 2007. Our product portfolio has expanded to include chemical safes, protective clothing and a range of quality products.

With our knowledge and experience we strive to excel in service and provide reliable products. The company has attained UKAS ISO 9001 and 14001 to enhance what we are able to offer.

We look forward to working with you in the future.

The history of stem injection

When Japanese Knotweed was brought to the UK in the 1800s, intended as a decorative plant for Victorian botanical gardens, there was no expectation that it would become such a wide-spread problem.

It is imperative that the spread of this invasive plant is controlled, as its rapid growth can destroy man-made and natural structures in its path. It is estimated that there is an infestation in at least every 10km2 of the UK and at an annual cost of treatment around £1.7 billion.

Herbicide is by far the most cost effective method of remediation, but the traditional technique of foliar application (spraying the plant) can be problematic due to the range of variable factors. The herbicide needs to penetrate the leaf, translocating via cells to the stem, down the chambers within the cane and eventually, the roots. In wet, windy or even hot weather, it’s not possible to spray and with the optimum treatment period after flowering, it makes a small treatment window. Other techniques, such as excavation of the plant and contaminated soil, can be unsuitable for projects where digging may damage infrastructure, such as railways, and is costly.

Stem injection is a much more precise technique; injecting the plant directly with a measured dose of herbicide ensures there is no wastage, and allows treatment throughout the growing season, even when weather would prevent foliar applications. One of the benefits is efficiency in scheduling and completing remediation projects around the optimum time of treatment after flowering. 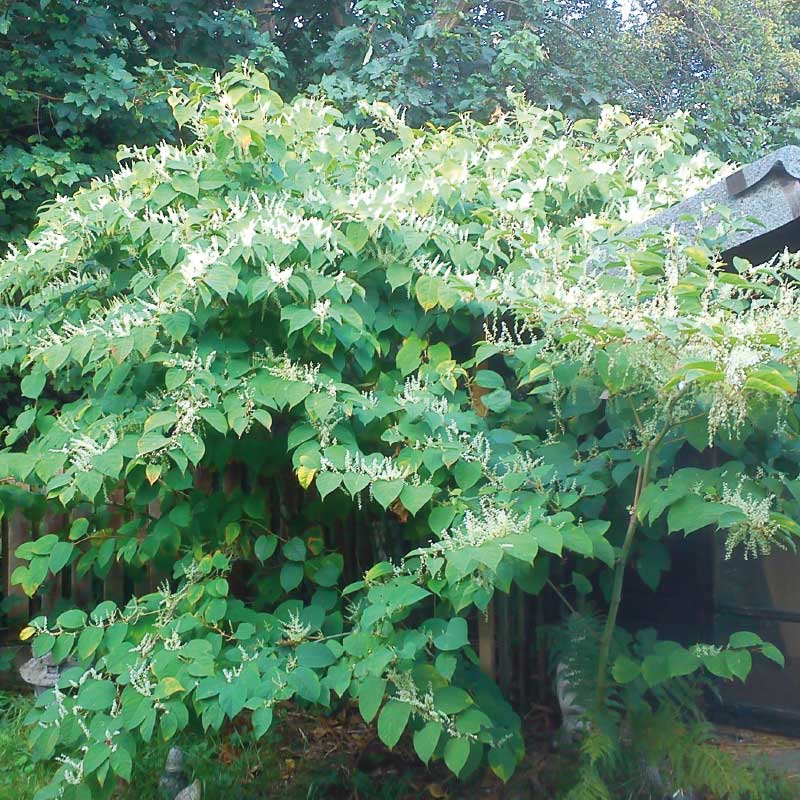 The method was originally developed in 1999 in the United States by Philip Burgess, who wanted to eradicate a knotweed infestation on a golf green, caused by contaminated imported top soil. He experimented with new ways of controlling the plant, as spraying would have resulted in the death of the nearby grass. The research involved numerous variable factors, such as time of year, different herbicides and injecting different parts of the plant. It was found that inserting the herbicide directly into the stem successfully prevented further growth, and caused the plant to deteriorate.

In the following years, commercial trials run by Monsanto and Washington State University took place. JK International, a company owned by Philip Burgess and holding the patent for the technology, began extensive formal trials which were independently proven successful.

Around this time, Japanese Knotweed Control (JKC) in the UK was researching better ways of controlling knotweed, and discovered the overwhelmingly positive results that were occurring Stateside from organisations trialling the injection method.

After liaising with Phil and the team at JK International, JKC trialled the method in the UK for two years, to ensure the full results were captured. The outcomes were impressive; with a great success rate and healthy, vibrant knotweed plants treated in just one growing season.

After the UK trials, the system was modified, with a holster pack developed for extra health and safety. Japanese Knotweed Control’s sister company, Stem Injection Systems, was awarded the distribution rights for the whole of Europe.

Back in 2007, there was much less awareness of knotweed. The concept of stem injection was unknown amongst the organisations and individuals already dealing with the plant, so an education process was needed. This began with the formal UK and European launch of the stem injection technology at the Cornwall Knotweed Conference, where attendees from all over the world gathered to discuss the problem of Japanese knotweed.

JK International continues to manufacture the tools and hold the patents for the technology in the US, and Stem Injection Systems still have the only distribution rights though its distribution partners for the UK and Europe. Continual development and research takes place to enhance performance.

The proven success of stem injection has led to it becoming one of the most common technologies deployed as treatment, with many UK local authorities
now utilising it as their only method to tackle the plant. It is specified as the preferred treatment option on the majority of tenders on or near water, and it is also mandatory in some EU states.